The Escape Room phenomenon arrived in Spain years ago. Now this type of leisure is already being modified in various styles of Escape Room. In this article we approach the new forms of Escape Room.
You can talk about types of escape rooms in two categories: linearity, sensational.
Linearity, as its name suggests, is related to linear and non-linear form in the escape game. Linear rooms they are characterized by the fact that the puzzles are solved in a simple way (meaning: by solving a clue, the player obtains a riddle to go directly to the other). In this type of Escape Room, players can concentrate on solving the current puzzle, without worrying about other things. In this way players increase their teamwork and communication.
On the other hand there is non-linear escape room. In this type of room there are several clues to solve at the same time, so each of the players has to solve riddles separately to complete objects to win another clue. Here teamwork is no less important, it also increases the ability to support other team players.

The other category (for many more important): rooms divided by sensations.
Here we recognize several types: 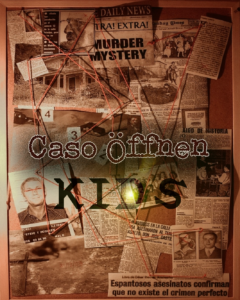 Can you discover the identity of the killers?

If you want the entertainer to be the Game Master, a total of €20 must be paid at the center.

You can find out more about which cookies we are using or switch them off in settings.

This website uses cookies so that we can provide you with the best user experience possible. Cookie information is stored in your browser and performs functions such as recognising you when you return to our website and helping our team to understand which sections of the website you find most interesting and useful.

Strictly Necessary Cookie should be enabled at all times so that we can save your preferences for cookie settings.

If you disable this cookie, we will not be able to save your preferences. This means that every time you visit this website you will need to enable or disable cookies again.